How the Eyeline Putting Mirror Fixed My Aim

If there is one thing to know about putting, it's that the angle of the club face (where the face of the putter is pointing at impact) when you strike the putt is far and away the most important element of being a good putter. Even if your path is not perfect you can still make a fair number of putts if your putter face is perfectly aligned to the proper path of the putt. In fact, according to this study by Science&Motion Sports, makers of the SAM PuttLab, 83% of the direction a ball will take coming off your putter is attributable to the putter face angle at impact. So generally the ball is going to go where the putter is pointing. Sounds simple, but you'd be surprised how often this fundamental is overlooked.

When you watch the tour pros make 59/60 putts from inside 5 feet you find it mind boggling. Of course they have fine-tuned their strokes to match up the proper face angle and path (the other 17% of putt direction) to the tiniest of variances. In fact the renowned teacher Ralph Maltby has estimated that tour pros "have developed the skill to align the putter face angle to the intended line by less than ½°." So the best putters know that the face has to be precisely aligned at impact to be a great putter. In fact you will miss a putt of just 5 feet if your face is open 2 degrees at impact. Think about that, 2 degrees isn't much at all.

What I Learned with the Eyeline Putting Mirror 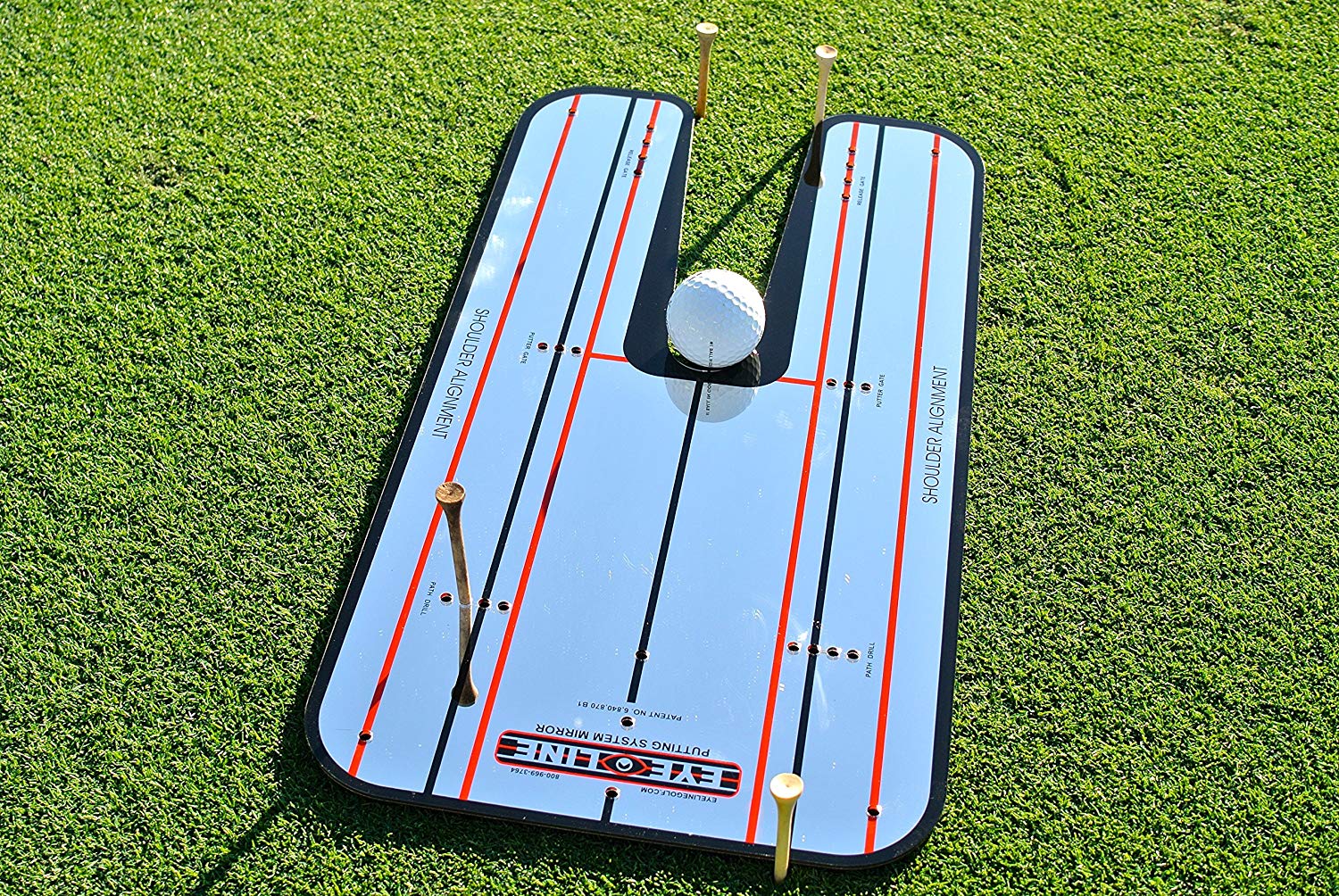 So my story is missing putts to the right. I would venture to guess that 90% of my misses are right of the hole and it can be maddening. I've gone entire rounds missing every putt right and it was driving me to the brink. I felt like I had a good stroke and would get streaky and make a lot of putts, but then the misses to the right would sneak up again and again.

I'm a practicer, so I worked every drill imaginable in an attempt to stop missing putts right. But they would still show up and usually at the worst times!

Then I came across an article on being right handed but left eye dominant, which is my case. The article explained how this could impact how I see the line of the putt, meaning I might see the line right or left of where it actually is which was very telling. So at that point I thought maybe I had an alignment issue. I had heard and read about the Putting Mirror from Eyeline Golf and had even seen some pros using it in their pre-round warm ups. In 2019, I ordered one and went out to my course's practice green and started using it right away and all I can say is wow, what an eye-opener (pun intended).

Here's what I did for my first session with the mirror:

I chose a right-to-left breaking putt of about 8 feet and lined up as I normally would without the mirror. Then I moved the ball and put the mirror down on the same line my ball had been on and stepped back. The Putting Mirror was lined up about 8 inches right of where I thought I was aimed! At least 8 inches. I was aimed so far right that I would have to pull the ball on-line to make the putt.

So, for the next step I decided I was going to line the mirror up perfectly and then address the putt. Working from behind, looking down the mirror towards the hole, I rolled several balls by hand and tweaked the mirror alignment. Once I could roll the balls on the proper line and make them quite easily, I knew I had the mirror lined up perfectly for the putt I was practicing. Then I put a ball in the putting channel of the mirror and addressed it knowing it was properly aligned. And I felt like I was lined up 3 feet left of the hole. It was truly frightening to find out how far off I was. How I had ever made any putt was hard to imagine at that moment.

So now I knew I was aligned too far right. No question about it. Going back to our formula, if I was aligned too far right, I would have to somehow close the face at impact to try and get the putter pointed at the hole. So I was curious how I was making any putts at all and I setup an appointment at a local shop for a putter fitting which included a SAM PuttLab analysis. And sure enough the evidence was perfectly clear. My approach to putting was aiming right, cutting across the ball at impact (this was a subconscious effort to make up for the rightward aim), and trying to close the face the perfect amount to point at the target. And the vast majority of the time, my face was right of the target at impact. That's why I missed putts right. It couldn't be more clear.

So what have I done to change my putting? Well it's a work in process (believe me) and I'll update you as the 2020 season continues, but I've been working on taking all these variables out of my stroke. So I'm trying to find the best way to get properly aligned (the line on the ball is hard for me), and then I'm trying to get my path and face more square throughout. So no more cutting across and holding the face open. We shall see!