What I Learned from Watching Celebrities Play Golf

So many celebrities are avid golfers. You’d think that with their enormous wealth and the top-tier golf instruction they can afford, their games would be flawless. But this is rarely the case.

Recently I watched a few videos of celebrity golf swings to see whether I could learn anything, and I was surprised by some of the swing flaws I saw. These are guys in the top echelons of Hollywood and political circles, yet their stances are off, they don’t follow through properly, and various other golf swing fundamentals are broken or ignored completely.

And you know what? I found this strangely motivating. It leveled the playing field a little bit: if these guys get it wrong with all their money and privilege, then modest wealth isn't a barrier to playing good golf.

We decided to commission a PGA professional to take a look at some of these swings and pick out the most actionable tips that you might want to work on to improve your golf games!

Your back and shoulder muscles should do the work, not your wrists!

Ray Romano taught us this. When he steps up to the ball, Ray aligns himself and the club really well. “But it all goes wrong with the first move”, as our PGA professional said. 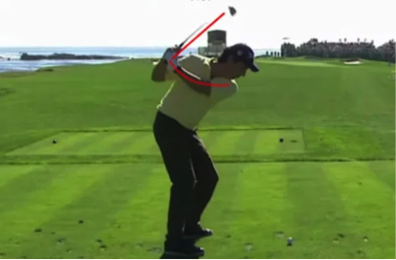 From here, Ray puts too much movement into his wrists, leading to a scoop action at the bottom of the swing. “This is usually a subconscious attempt to help the ball into the air”, our professional says, before explaining that often it just makes your shot unpredictable. Using the power of your shoulder and back muscles is the best way to swing. Resist the urge to overuse the wrists.

Justin Timberlake is another celebrity golfer we looked at, and he was one of the best we saw. His swing has a great address position and great alignment, but despite this, he suffers slightly on the downswing.

At the moment of impact, almost all of Justin’s weight is on the left leg, and as our PGA professional noted, “this is a distance killer on long swings”. Staying mindful of where your weight is throughout your swing will help you to get more distance and consistency in your game.

Keep unnecessary movements out of your swing

Jack Nicholson taught us this. His swing is wild, with a really noticeable unbalanced finish. As you can see below, Jack’s torso is centered over both legs rather than being over his leading leg:

This lack of balance means the geometry of his swing is inconsistent, and as a result his shots will be less accurate and more unpredictable. 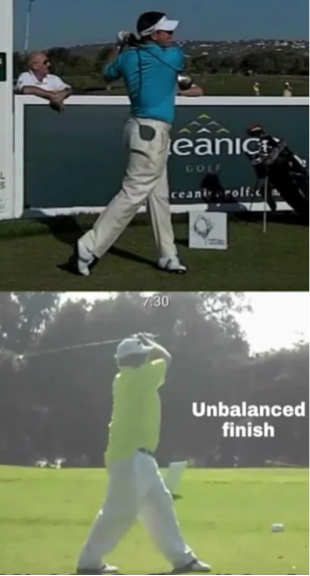 The takeaway here? It’s important to focus on maintaining the correct posture throughout the entire swing.

Avoid swinging under the plane

Another thing to look at is club head height on the back swing. President Donald Trump is a good example of a golfer who does’t swing the club up, but swings it around his body. The club head doesn't get high enough which will require him to lift the club at the top of his backs wing. When you lift the club it can cause a number of downswing issues. 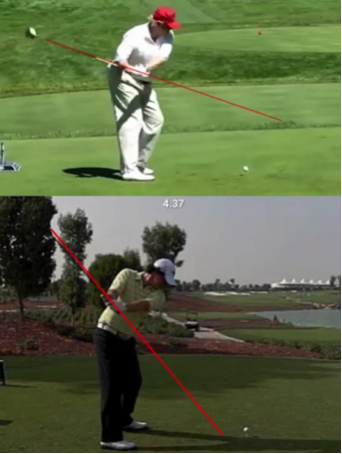 The red back swing plane line for Trump is much more shallow than Rory's, which again will require later manipulations.

Interestingly, Trump still achieves a powerful swing despite this plane, showing that you can play well if you figure out how to make compensations that get you to impact properly. Our PGA professional said that Trump would probably be more consistent if his club head was more upright on the back swing, and that he may be able to squeeze a bit more power out of his (admittedly already powerful) swing.

Aim the club shaft at your left shoulder, rather than straight vertical

Some players play very well addressing the club with the shaft more centered, but for most amateur players (especially with irons), moving the hands more in line with the left shoulder would help them compress the ball better. Watching Will Smith’s address (on the right), we can see that his hands are more in-line with the ball which means he has to make a move to get them ahead of the ball at impact. It could be easier for him to just start with his hands slightly ahead, pointed more at the left shoulder like Tiger. 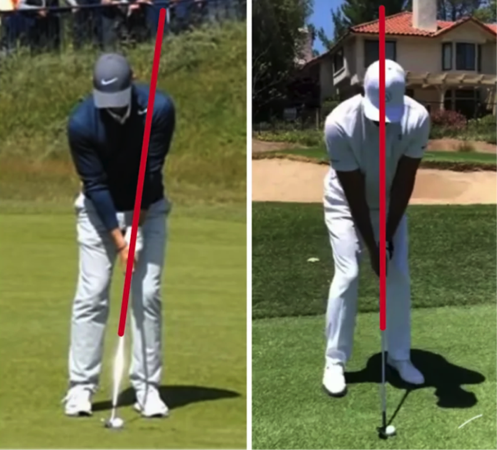 Avoid moving your hips forward as you swing

The hips and lower body play a critical role in the effectiveness of your golf swing. Watching Samuel L. Jackson play shows us the flaw known as early hip extension, where you move your pelvis closer to the ball at impact. The risk here is that your hips get in the way of your arms and club, and interrupt your swing. 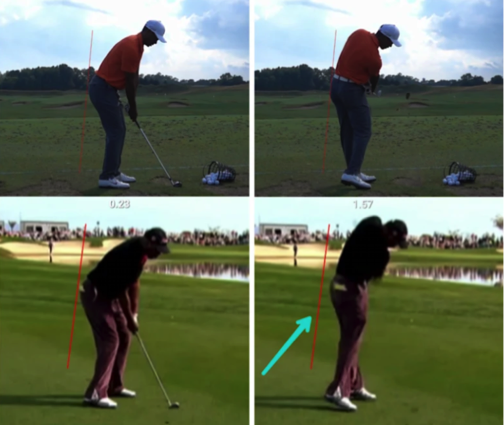 The green arrow shows Sam’s hips moving much closer to the ball than where they started. Look how Tiger's hips stay on that red line and turn. Often just being aware of this flaw, and making a conscious effort to turn and keep your hips back can control early hip extension.

Stand up straight if you can, and if you’re not able to, learn how to compensate!

This was inspired by Clint Eastwood’s swing. Because of age accentuating a natural stoop, Clint leans quite heavily over the ball with rounded shoulders. This means his back isn't straight at address, requiring compensatory movements through the rest of his swing. 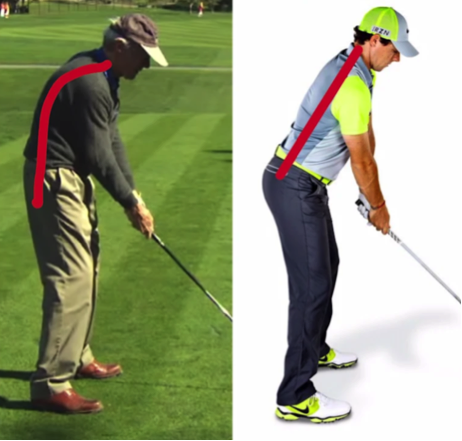 Obviously some people are restricted by their natural body shape, so improving posture isn't always an option. If this is the case, it’s worth learning about which compensations you can use to improve your swing, to reduce the overall impact.

It was quite fascinating watching these celebrities play, and seeing how golfers of all shapes and sizes (and wealth levels!) have flaws in their game. It’s motivational for a couple of reasons: first, there’s almost unlimited room for improvement. And secondly, it shows that improvement is just as possible for the average golfer as for the celebrities.

So with that, we’re off to practice what we've learned!

Information Collection, Use, and Sharing

We are the sole owners of the information collected on this site. We only have access to/collect information that you voluntarily give us via email or other direct contact from you. We will not sell or rent this information to anyone.

We will use your information to respond to you, regarding the reason you contacted us. We will not share your information with any third party outside of our organization, other than as necessary to fulfill your request, e.g. to ship an order.

Unless you ask us not to, we may contact you via email in the future to tell you about specials, new products or services, or changes to this privacy policy.

You may opt out of any future contacts from us at any time. You can do the following at any time by contacting us via the email address or phone number given on our website:

Wherever we collect sensitive information (such as credit card data), that information is encrypted and transmitted to us in a secure way. You can verify this by looking for a lock icon in the address bar and looking for "https" at the beginning of the address of the Web page.

We use "cookies" on this site. A cookie is a piece of data stored on a site visitor\'s hard drive to help us improve your access to our site and identify repeat visitors to our site. For instance, when we use a cookie to identify you, you would not have to log in a password more than once, thereby saving time while on our site. Cookies can also enable us to track and target the interests of our users to enhance the experience on our site. Usage of a cookie is in no way linked to any personally identifiable information on our site.

We share aggregated demographic information with our partners and advertisers. This is not linked to any personal information that can identify any individual person. We use a credit card processing company to bill users for goods and services. These companies do not retain, share, store or use personally identifiable information for any secondary purposes beyond filling your order.

This website may contain links to other sites. Please be aware that we are not responsible for the content or privacy practices of such other sites. We encourage our users to be aware when they leave our site and to read the privacy statements of any other site that collects personally identifiable information.

We'd like permission to email you ONCE a month!

We promise, just once a month. We will email you news about our site, deals and offers from Golf retailers, and other Golf info you might find interesting!

You can opt-out at any time, but we hope you don't.

Just enter your email below. We will send you a validation link to confirm you really do want email from us (we respect your privacy).

* We also own WinFreeGolfBalls.com - we will NEVER sell or otherwise transfer your email address to anyone. Never!